The weather forecast showed heavy rain for today and a wise decision to cancel in advance was made. Not a good start to the year but no point in everyone getting soaked, so hopefully next time we can start with winter maintenance.

For the last meeting of the year, eleven friends in attendance and were:- Alan, June, Andrew, Hayden, plus Tim, Peter, Dave MB, David D, David G, Jamie and Henry, Mick, Alan S, Robin and Paul, whilst Dave M emailed to say he couldn't make due to kids sickness and Cliff also emailed with his non attendance but wished everyone a Happy Christmas. 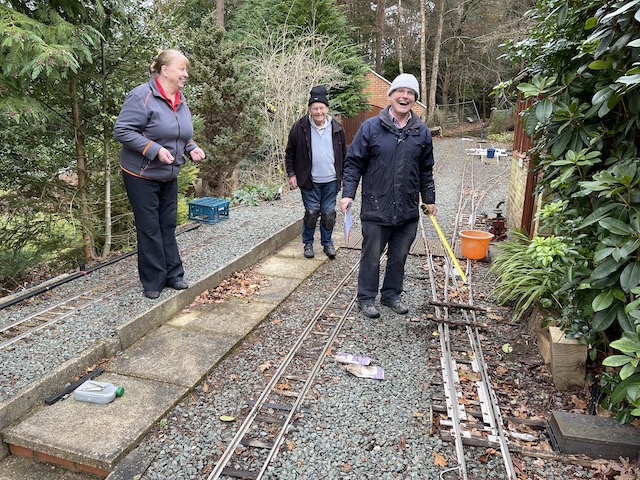 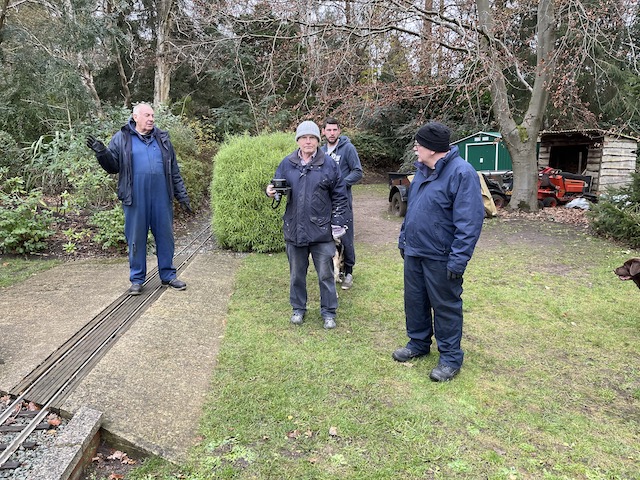 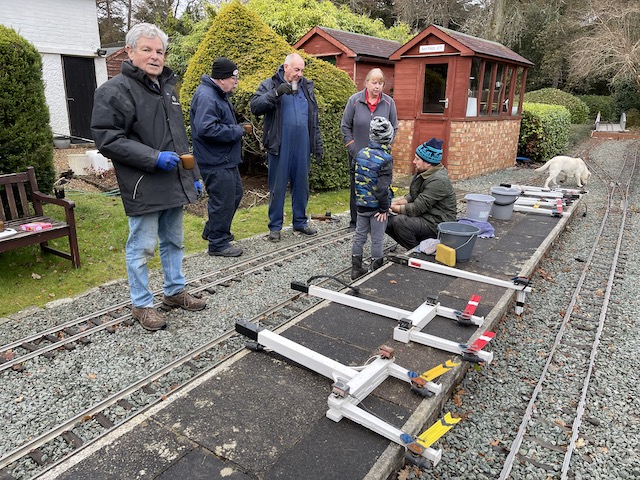 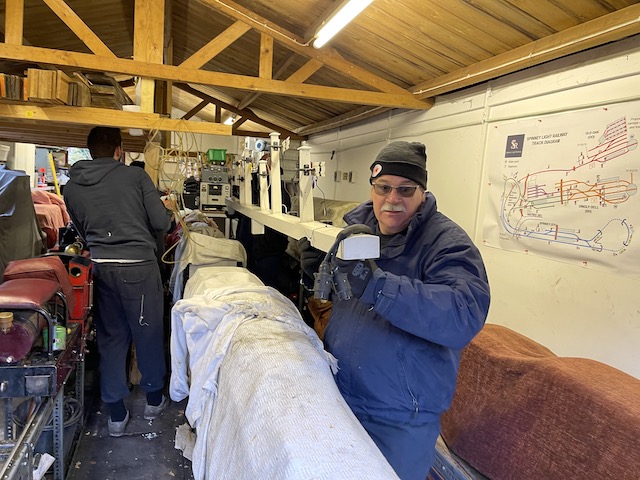 On the jobs list today were washing and putting away the signals, winter project check, re sleepering, Signal discussion for Spinney and drainage. With the help from Andrew, we managed to clear the drain in the Old Oak turntable pit, which had accumulated years of earth and roots. All this was removed with our sleeves rolled up and arm down the pipe, a very messy job but needed doing. David D and Robin started removing rotten sleepers from under number 7a point located outside the Old Oak signal box and with so many decayed, it is amazing we haven't had any derailments there. Robin has taken away some wood to replace the sleepers with new. Also, he has taken the rail roller for track making which will be laid this winter adjacent to the carriage shed. Old Oak 7b point motor required attention and it was adjusted using appropriate tools to get the adjustment on the limit switch just right. Alan S, Mick and David G disconnected the Water pump from the Old Oak water storage and were bought indoors to avoid the winter freeze. David G also worked on a Spinney tunnel signal before it was put away. At the end of the day a light hearted discussion involved removal and relocation of Spinney signal numbers 12 and 13 and placing them where signal 15 currently stands. Also widely approved by anyone who drives, is the removal of the timers, especially as the tunnel exit signal is normally displaying a red aspect and a different colour would be nice for a change and save our brake blocks or shoe leather. All good ideas but getting Dingly signal box into a working order takes priority at this point in time.

The main activity was the removal packing away of the signals for winter protection, all signals were washed and assessed as to whether any maintenance was required. Some are showing signs of a repaint required and Paul was observed removing many of the signals as were others. Dave MB used a hoe to scrape moss from the sleepers and covered a vast majority of the track. Picture shows the large overhead gantry signals being removed from storage area as they had been put away too eagerly and prior to washing. All these jobs need to be remembered for next year. Thankfully the weather remained mild and it didn't start to rain until 15.00 which is when we packed up for another year. Once again thank you to Alan and June for allowing us to operate the railway and to June for the teas and cakes. This time mince pies were in order and soon disappeared.

Happy Christmas and a Happy New Year to all our readers 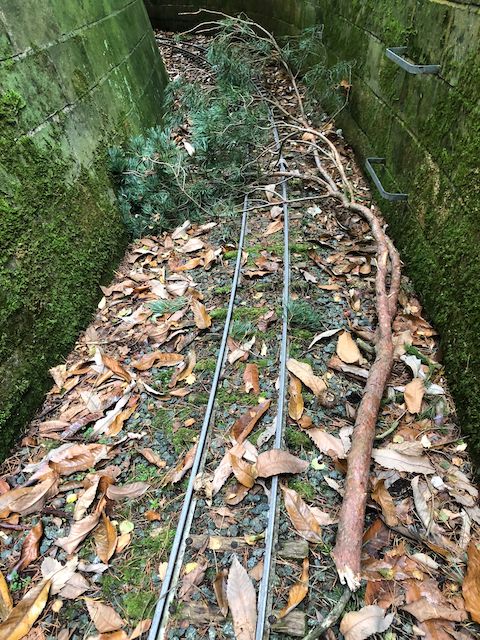 Nineteen friends in attendance and were:- Alan, June, Andrew, Hayden, plus Tim, Heather, Peter, Dave MB, David D and Sue, David G, Dave M, Jenny and family, Jamie, Anika and Henry, Cliff, Mick, Alan S, Robin and visitors Matt and Andy. Site tidied up with Dave MB doing a lot of leaf clearing and as the picture shows, we had more than a leaf on the line. Heavy rain and high winds the week before, causing the railway to be covered in leaves.

A dry day and with the clocks going back last week, it means it gets darker earlier, and with everything switched off at Old Oak, no lighting made packing away and loading difficult. Dave M invited along Andy who wishes to return and help between his shifts on the main line railway. Cliff arrived so we stopped for lunch or watched over our steam locomotives as for some strange reason I could not get a decent fire in the firebox. A good running day and very sociable just how it should be, with the season ending with the traditional fish and chips followed by fireworks. Thanks to Peter for organising and collecting the fireworks, not so many this year but better display with plenty of colour and bangs. Thanks to Jamie and Dave MB for additional pictures and also to June for tea and cakes and for organising and collecting the fish and chips, don't know how June remembered all our orders. It was nice to see so many stay after the running. 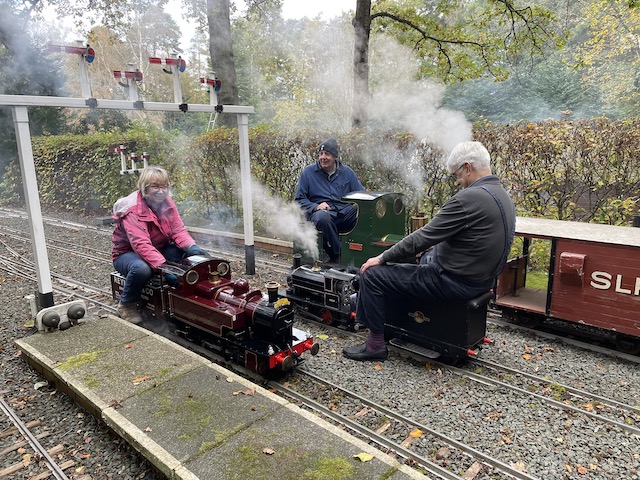 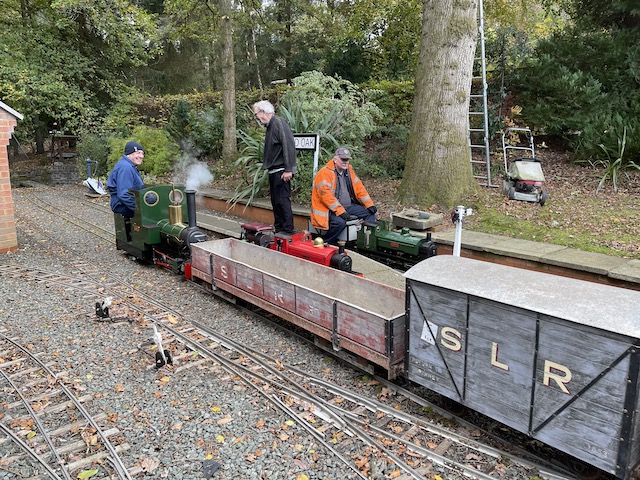 As can be seen from the pictures, areas where the railway would become busy at times. 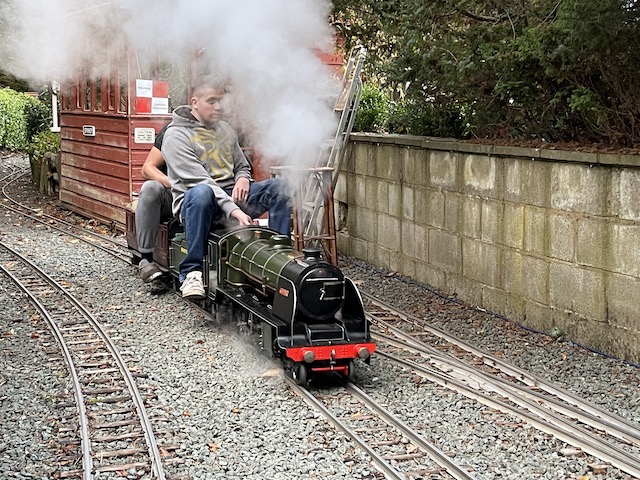 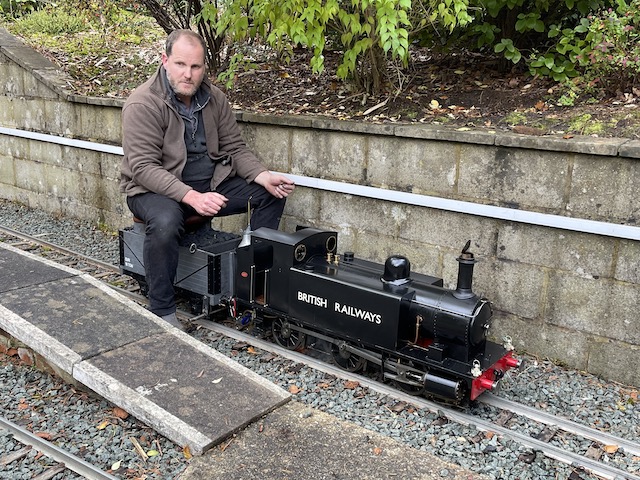 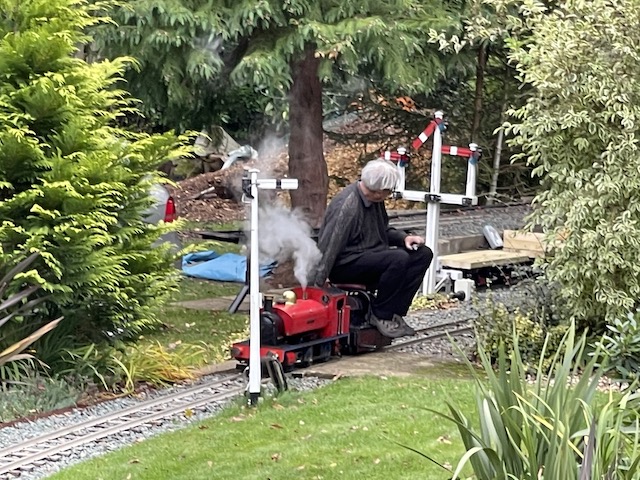 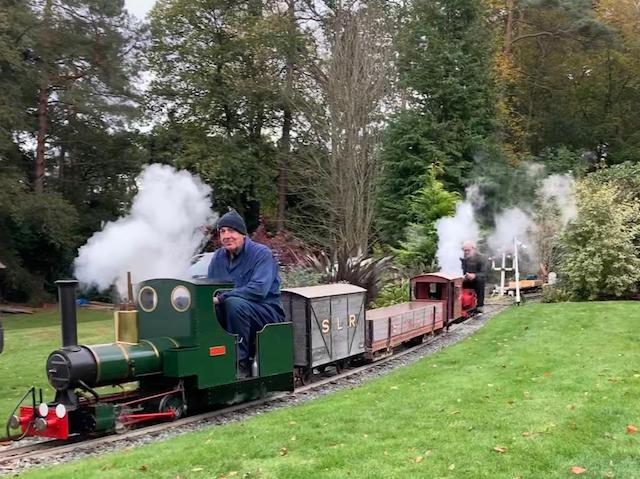 Eleven locomotives out on the railway today and were:- L94, Scott Line, Eileen, Bobside (Holmside made to look like a Rob Roy), King Jack, Karen, Kate, Class 20, Jesse, the petrol Scamp with wagons, whilst Dave MB continued to test his 1420 in the loco shed roads. David G has replaced his missing water cap from last time and ran for the afternoon. Visitor Andy was invited to drive King Jack and can be seen passing Spinney in the picture above. When Mick got his class 20 locomotive out, he somehow managed to run over the control cable which now causes the horn to sound when not required and a switch on the control panel is not working. Just in time for a winter project. Scott Line hauled two coaches and was driven by various people whist Mick hauled the Spinney freight stock with Kate. The picture on the right above, shows David G assisting Mick up the branch to Spinney. 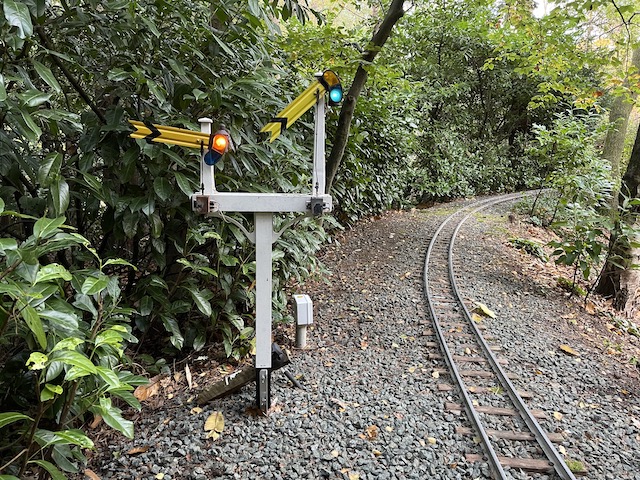 In the signal boxes were:- Old Oak - David D, Dingly - Peter then Jamie, Baytree - Matt then Cliff and Spinney - Robin. Spinney platform number 13 signal was temperamental, didn't like the cold weather, but as you walked up to it, it would suddenly work - otherwise all signalling worked well. All trains seamed to follow one another and the signal boxes would become very busy. Robin did a good job in Spinney as it felt like at times all sections were occupied and he had bells being sent, bells being received and the phone ringing all at the same time as well as operating the levers - you need to be an octopus. Jamie continued to get more experience in Dingly and David D is getting used to Old Oak changing from a sleepy signal box to one that is busy at the beginning and end and occasionally in the running part of the day. Picture shows Baytree distant signal illuminated which showed up well in the low light. I did stop and take a picture of the signal at the exit to Spinney tunnel as it displayed a green aspect, something you don't see very often. 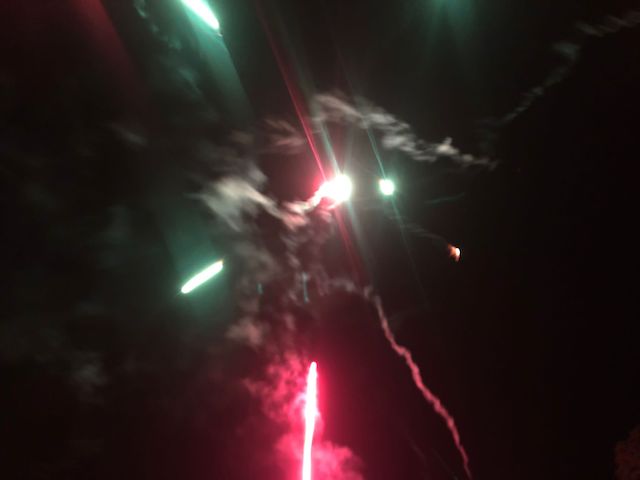 Unfortunately a blurred picture but what do you expect in the darkness and it does show the atmosphere and colours.

Next time will involve putting the signals away and starting winter projects. Robin has e mailed a list which includes dates and work required, resleepering in the cold and new siding adjacent to the carriage shed. I have a compressor so may be we could rig up an air supply for steaming up. That may be my problem for not steaming, not a good blower and that is my excuse and sticking to it. If the winter is not too frosty it might be worth re building the Old Oak turn table walls as the bricks are disintegrating.

To see summaries of our past activities use the links at the top of this page.

To see earlier raw News use the 'Archive News link at the top of this page.