Summer 2019 and a Sad Departure

Another year with a late start, compensated by starting on a glorious sunny June day.
Two new locos arrived, and two new members. We welcomed several visitors and we went visiting. Click below for a particular feature.
However the most significant event was the passing of Myke Baigent.

It would be hard to overestimate the contribution made by Myke Baigent to the Spinney Light Railway. Sadly, Myke passed away in 2019.

Myke was one of the first recruits of Joseph BD when the railway started and probably the most imaginative. His father built Bay Tree signal box and Myke did the original wiring. The automatic water system that kept the loco water filled up was of Myke's devising and these are only examples. A 'can do' man with intellectual and practical skills to match. 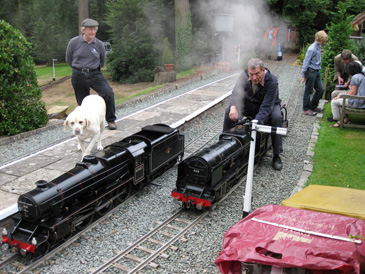 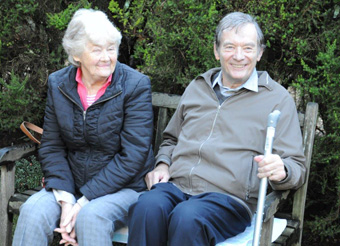 In a tragic twist of fate for such a wise and clever man, it was Myke's mind which took him from us. Although Myke was fully in charge of himself when Alan and June arrived in 2000, that magical mind and wicked sharp wit gradually deserted him in the following years.

By the time the website was active there was no doubt that the old Myke was slipping away and there are hardly any photographs of him in the website file. The left hand picture, from 2008, was possibly the last time he drove a loco on the railway.
However, with Marion, he was able to visit occasionally and enjoy looking at the trains.

A great friend who will be much missed. 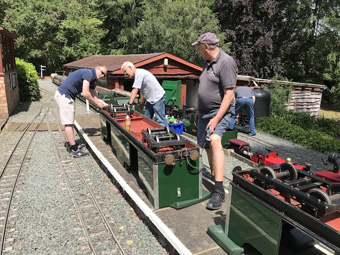 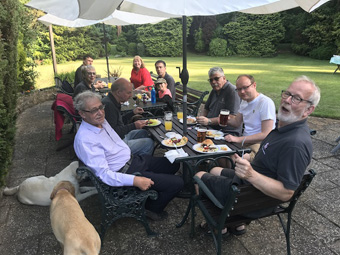 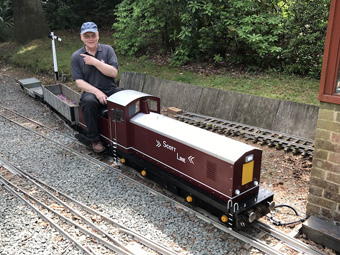 Still a bit of maintenance on the first day, but we did run trains, as this rare picture of Robin driving a loco shows.

Not in these pictures, but see later, Paul's new loco visited the railway on the first running day, although it did not run.

The bonus of the late start was an early first BBQ on the following running day. 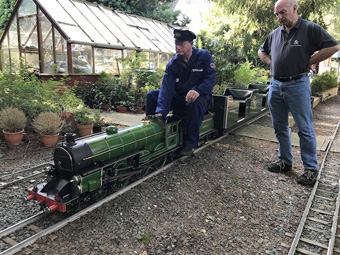 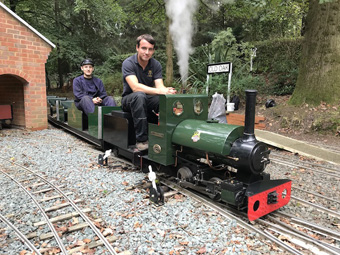 There were two club visits. In September, Cliff invited the Reading club and on the left we see an unusual model of a North Eastern locomotive brought by one of their members.
The other picture shows a narrow gauge loco from the North Weald club, invited by Mick. 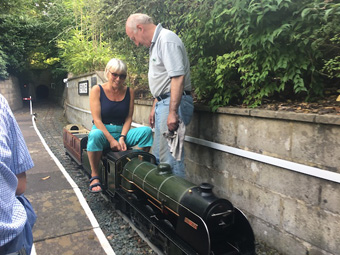 However, often our visitors are personal friends and we do try to make them welcome, often offering the chance to drive our precious locomotives.

On the right Alan A gives instructions to visitor Anne on King Jack at Spinney.

We have struck up a friendship with three London Underground signallers and below we see John on the Scot and Jason on Scott Line. Below that, Sean on Kate. Mick had quite a struggle persuading Sean to have a go but eventually succeeded and put a smile on Sean's face. 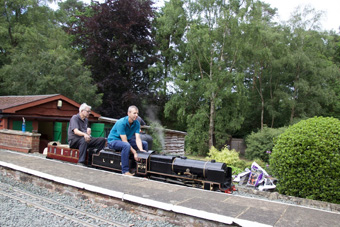 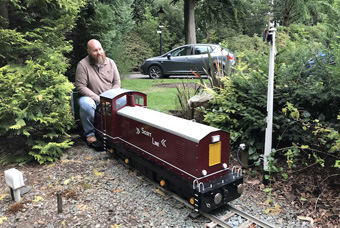 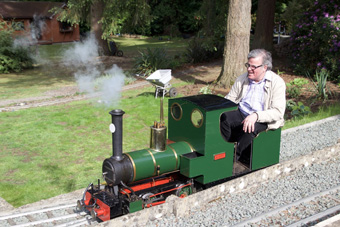 We also have signal box visitors; below left is Laura, Peter's daughter, in charge of Dingly, and right is Mick, a bit of a visitor as far as signal boxes are concerned, reading, whilst in charge of Bay Tree on a particularly quiet day. 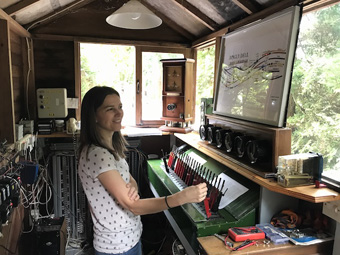 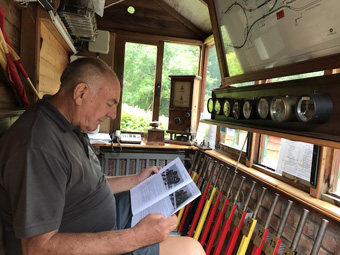 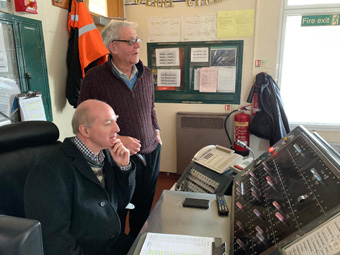 We went visiting.
First picture is of Alan and David in Upminster signal cabin on the District Line. Alan is in the control seat and studying the track display, but not daring to touch anything! Richard, Peter and Mick were also guests of our Underground friends at various times during the year.

Below left we see Jamie with his engine at the Cockcrow Gala. Joining him in the picture are Cliff, Dave Marsh, and Dave MB.

Mick is now a volunteer at the Epping and Ongar Railway and he took Tim there in September where we see Tim having a nostalgic seat at the controls of a loco he drove in the past. 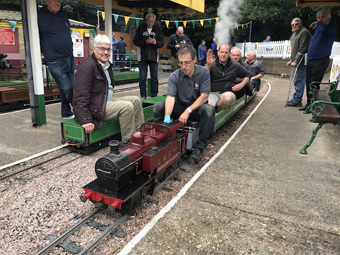 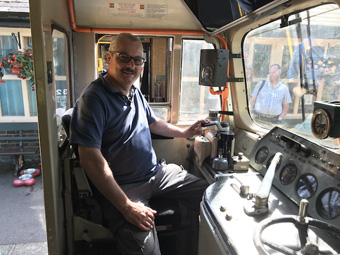 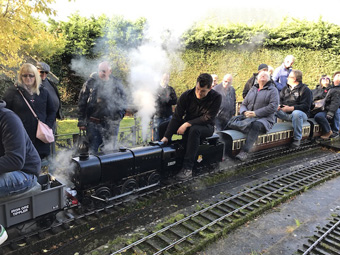 Lastly a rather sad visit late in the year to Ted Martin's railway near Thame. Sad because the railway is to be dismantled.

In a story much like that of the Spinney, enthusiast Ted built the railway in the grounds of his house and it flourished for many years. Eventually Ted died; his widow stayed on and allowed the railway to continue but when she died the house was sold to developers and the railway is to go.
Visitors from the SLR were Tim, Heather, Mick, Robin and Nick S who we see on his Southern Austerity locomotive.

Thank you Hugh BD for hanging on to the Spinney until a buyer interested in the Spinney Railway came along and thank you Alan and June for taking us on and allowing the SLR to continue.

In 2019 we were joined by new member Paul Fox and his friend Dave Harvey. A company called 'Silver Crest' is offering ready to run locos, designed in the UK but manufactured in China. Paul has purchased one of these locos in BR black. Dave MB has also bought a 'Silver crest' loco to the same design but painted in Great Western green. 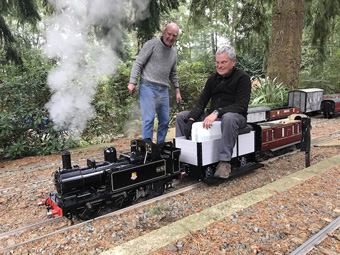 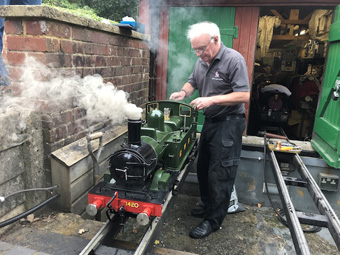 Both Paul and Dave have had odd drives at SLR locos, but total responsibility for the preparation and running of an engine is new to them and I am sure they would agree they have found the experience challenging. The designers of the locos have gone for maximum detail which has made the controls small and awkward to access; a complete contrast to the likes of most other Spinney locos where the cab controls are simpler, out of scale but easier to operate. Nevertheless these locos are undoubtedly the most accurate and beautifully finished models on the SLR.

The photographs below try to cover all the members and locos not already mentioned. They illustrate the working of our SLR throughout 2019 and hopefully speak for themselves. The intention is that no active team member or active loco has been missed from the photographs on this webpage. In searching the 'News' for examples, some were harder to find than others! Contact DG if you can identify a loco or team member missing. 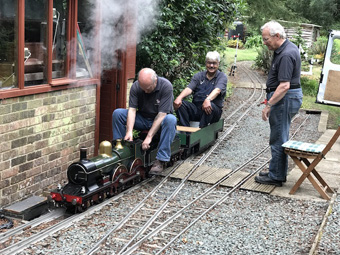 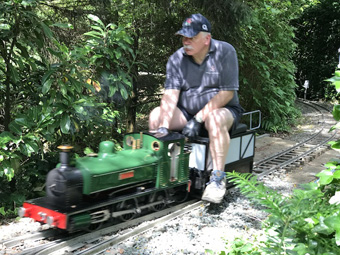 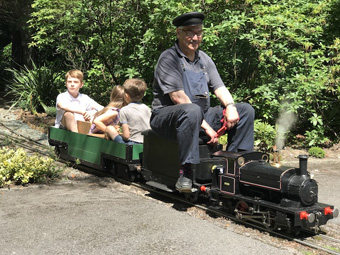 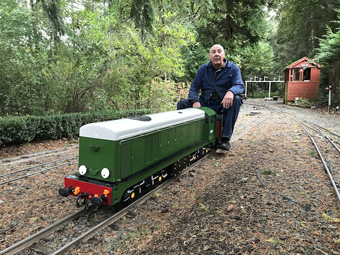 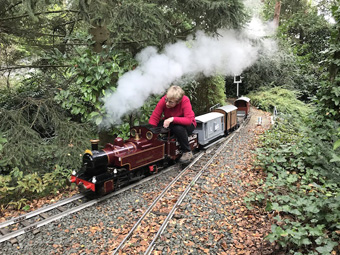 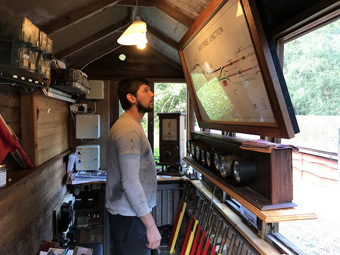 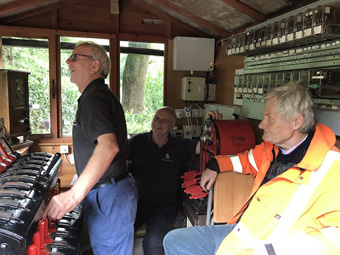 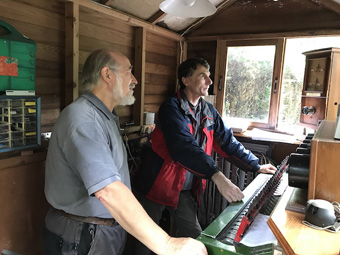 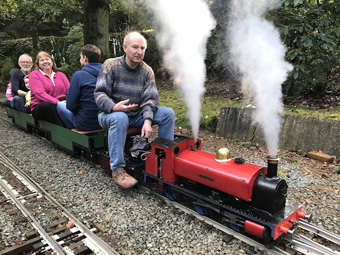 It's always difficult to find photographs of our president driving an engine and that's because he rarely does so! It's even rarer to see June riding with him. However, late in the year he was persuaded to get behind Eileen and here we see him, with June, setting off with a full head of steam on the climb from Old Oak.

Thank you June and Alan for another year at your railway. 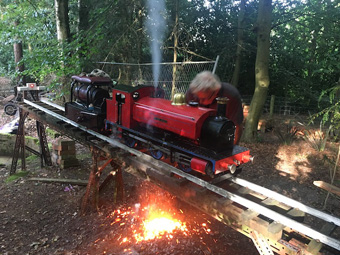 The end of a day for Eileen and the end of this year's summary.
Back to the top of this page