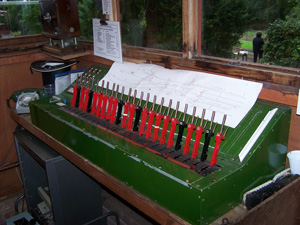 Dingly Dell is the main terminus of the railway. The only signalbox Dingly communicates with is Bay Tree Junction. The engine shed is connected to the railway at Dingly.

The lever frame at this signalbox is a twenty four lever frame which was built by the Ballantine Dykes family.

The complex pointwork in the station throat means only limited track circuiting is provided.

Absolute block working is used to and from Bay Tree again using a former LNWR instrument.

A venerable train ready to start indicator of LNWR origin is used to show the signaller when trains are ready to leave the station. This indicator was recovered from Rugby No.1 signalbox when it was abolished in the 1960s.

The lettering and general design of the signalbox diagram is based on an old GER diagram from Althorne and it is provided with a small number of track circuit indications.

A position light ground signal is used to control movements from the engine shed.