Charity Work at the Railway

Once a year we usually give the Railway over to a charity day. We run trains and our chosen charity invite guests who pay in order to ride on the trains all afternoon. 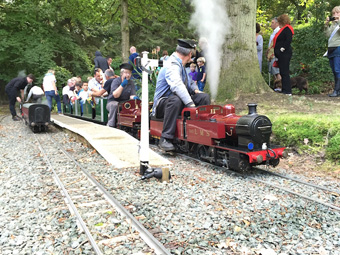 The picture shows a train about to depart from Old Oak station during the charity event of 2015 when we ran the railway in aid of the charity Change of Scene, a local charity with a mission to help disadvantaged children and young people.

Organising the day is quite a challenge both for the Railway team and the team of stewards the charity must provide. About 10 stewards are needed from the charity team to organise car parking, man the entry gate and regulate queues for trains plus organise any added attractions they may wish to provide on the large house lawn: for example Bouncy Castle, Refreshments; Face Painting; Croquet; the inevitable raffle, they are limited only by their imagination. In 2015 Change of Scene brought a mini zoo of small animals! There is only one toilet in the garden and in 2015 Change of Scene sensibly provided a couple of 'portaloos'.

The charity organisers must visit during a normal running day beforehand to appreciate the Railway in operation and the opportunities and limitations of the site.

On the day itself everyone comes early, the railway team to ready the Railway so we are seen at our best and the charity team to prepare their added attractions and set up queuing areas at the stations. Typically the Railway opens to paying guests from 2pm and trains run continuously until 5pm or until everyone has had enough! On a busy charity day we can just about cope with 200 visitors. 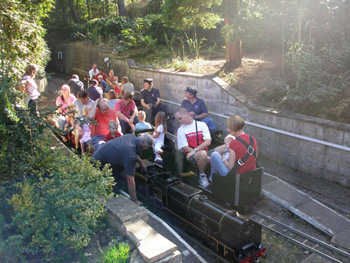 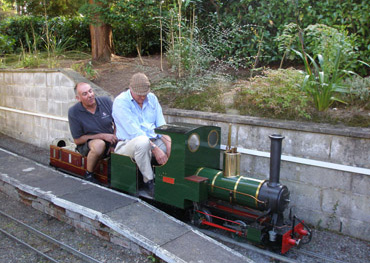 A few lucky people can make an extra donation and have the opportunity to drive one of our locomotives. The picture shows just such a driver concentrating on the job with his instructor riding behind. 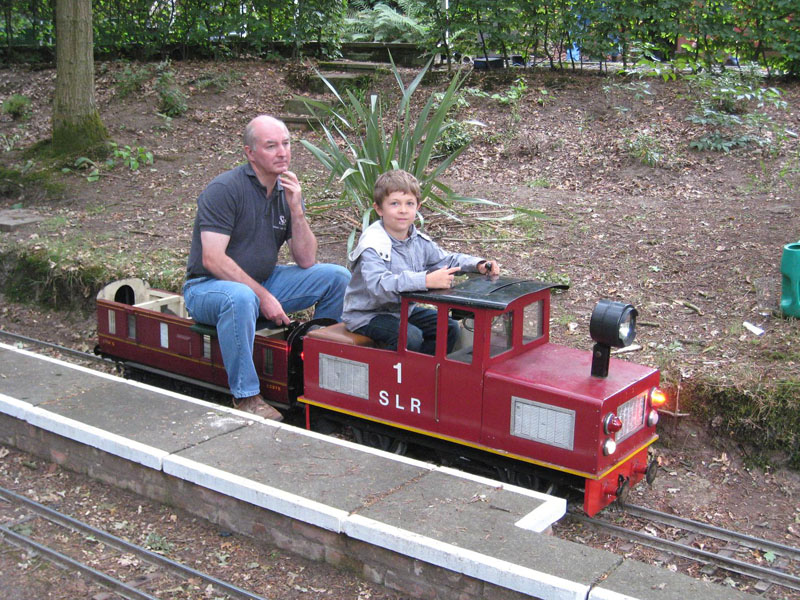 We get trainee signalmen on charity day and electric train drivers.
Steam engines are hot and heavy so younger guests may prefer to try a drive on our electric loco.

It's a lot of work and by no means easy money but it is a different day and the faces of the children show how much they enjoy it. We enjoy it too.

If you think your charity could be our annual charity then contact Alan Ainslie or send us an e mail via the contact page of this website.