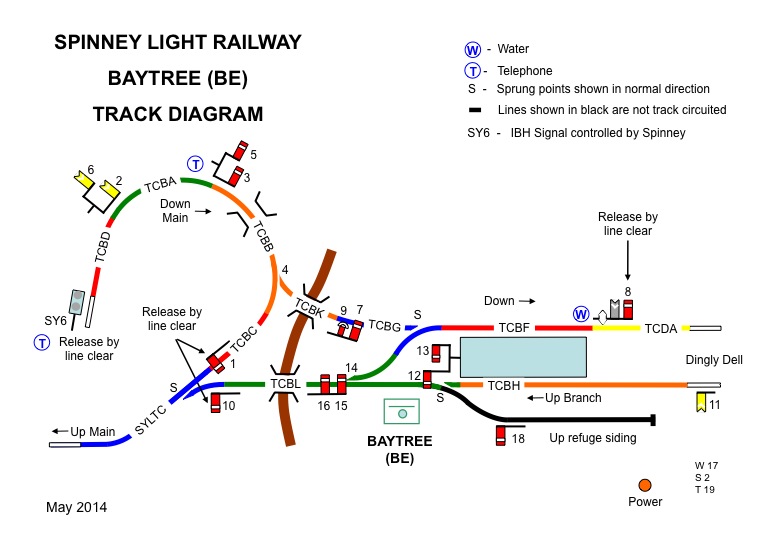 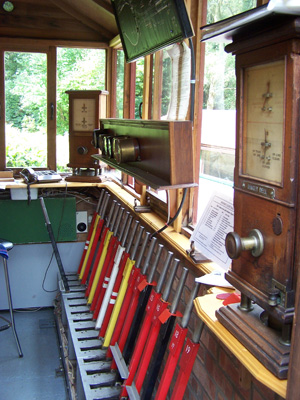 Bay Tree is one of two signalboxes on the main line loop. It communicates on the main with Spinney and with a terminus at Dingly Dell.

The length of main line that Bay Tree controls is very short. This leads to a bizarre block bell conversation with Spinney. When a train comes from Spinney to return to Spinney it approaches Bay Tree's section signal before the end of the train is inside Bay Tree's clearing point. Thus the dialog sent on the bell to Spinney is "Train Entering Section" followed immediately by "Train Out of Section".

The lever frame at Bay Tree is the sole surviving Cromar white garden railway frame and is 19 levers controlling points and signals electrically.

It is hoped that it may be possible in the near future to replace this lever frame possibly with a GSR type power frame section from CIE.

The main line area is fully track circuited but due to the need for the removable bridges there are some gaps in the track circuiting. 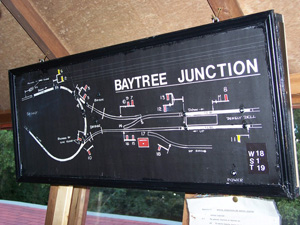 Absolute block working is in placed between Bay Tree and both Spinney and Dingly Dell signalboxes with the usual block controls in place using former LNWR No 18 and 19 block instruments.

To allow operational flexibility the down platform at Bay Tree station is permissive and a calling on signal is provided on the down inner home signal.

The illuminated diagram is a white on black type based on LMS Derby Division standards but to one half size.

The relays used at Bay Tree are either BR 930 series miniatures or GRS B1 types that were originally used at Stratford for the original Liverpool Street to Shenfield electrification.

It is also possibly to convert one track circuit to a 50Hz type to allow the operation of a double element a.c. vane relay and associated feed condenser to be demonstrated.